Written by Pedro Campos
Updated over a week ago

Device bid adjustment refers to changing bids for computers, smartphones and tablets, so each one has a custom bid. Analyzing campaign data and their performance on each of these devices, Pareto Ads will offer adjustment insights for each of them in their campaigns.

Our algorithm scans different data related to campaigns (or ad groups) and is able to offer suggestions for modifications for each device, in order to avoid wasting money on devices that are not giving financial return. It also takes advantage of opportunities, offering a special bid for devices performing better.

Some businesses have better performance on computers when compared to smartphones, and vice versa too. In general, tablets tend not to bring in many conversions, but this can change depending on the business. Therefore, careful monitoring of the data is essential, requiring a large volume of information so precise conclusions can be drawn. Based on the metrics aimed for, whether CPC, CPA or ROAS, there'll be enough data to raise or lower the bids for each of these devices.

When a device is found to have bad performance, bid reduction can be applied to it. This percentage can reach up to 100%, which consists on not printing ads on that device. A positive bid adjustment can also be applied by setting a percentage increase from the base bid. For example, if the bid for a particular keyword is $ 1.00, applying a 20% increase for computers in a given campaign. In this case, your bid on that device is now $ 1.20.

The adjustment range that can be applied varies from -100% to + 900%. It's important to note that setting a bid adjustment for a campaign and also for an ad group within it, the ad group adjustment will prevail.

It's important to note that the bid adjustment is chosen by analyzing each campaign (or ad group) individually, and it's always based on the statistical analysis of the data. A device does not always perform the same in different campaigns. Sometimes, in a campaign it has a bad performance, deserving a negative adjustment, while in another it has a normal performance, thus needing no adjustment.

So if you received a warning from Pareto Ads via card in the Workflow about adjusting bids for devices, this can be an excellent opportunity to make your account more efficient and save over the year! 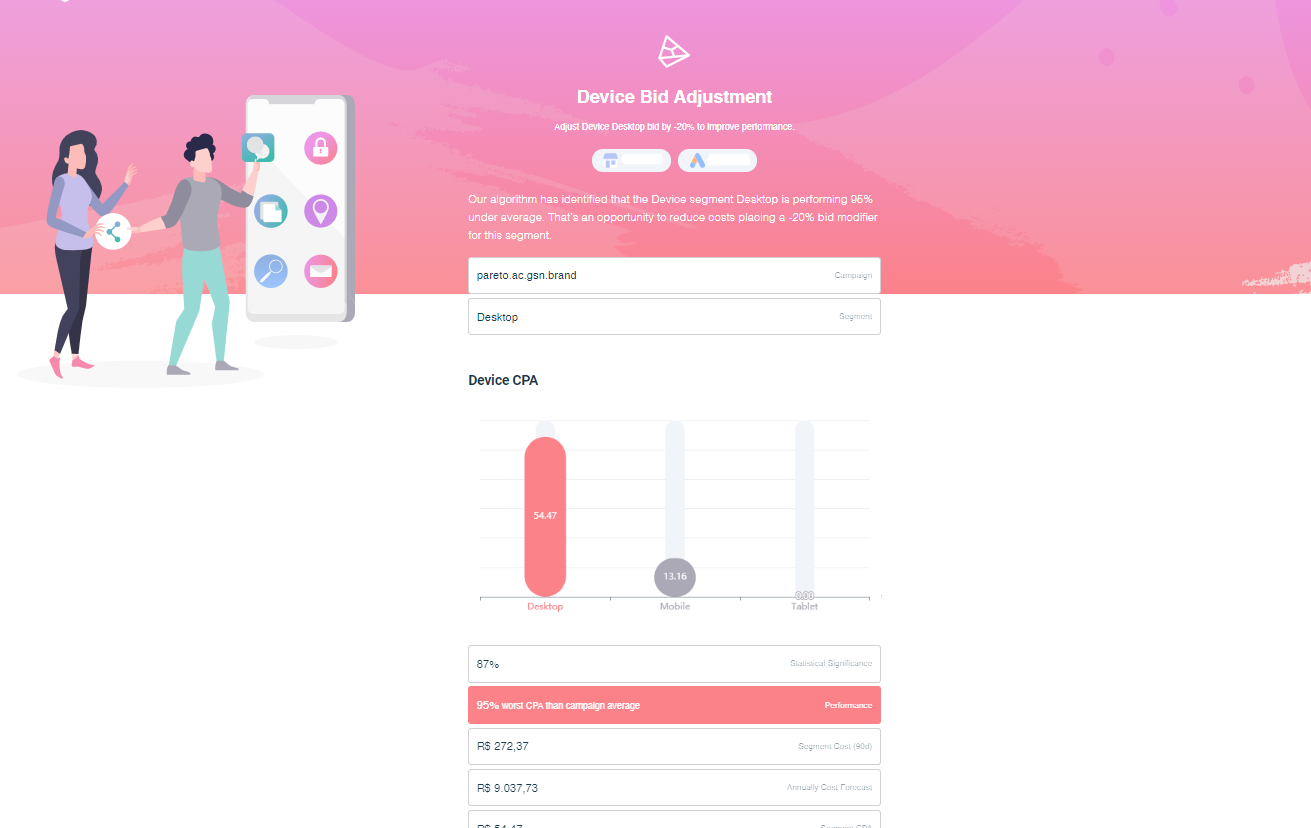 With just one click, you'll be able to adjust the bid for devices, saving you from a few cents up to thousands of dollars just by dragging the Card! Just drag it to the “Done” column and the adjustment will be made automatically.

Learn more on our blog!

Visit blog
Did this answer your question?